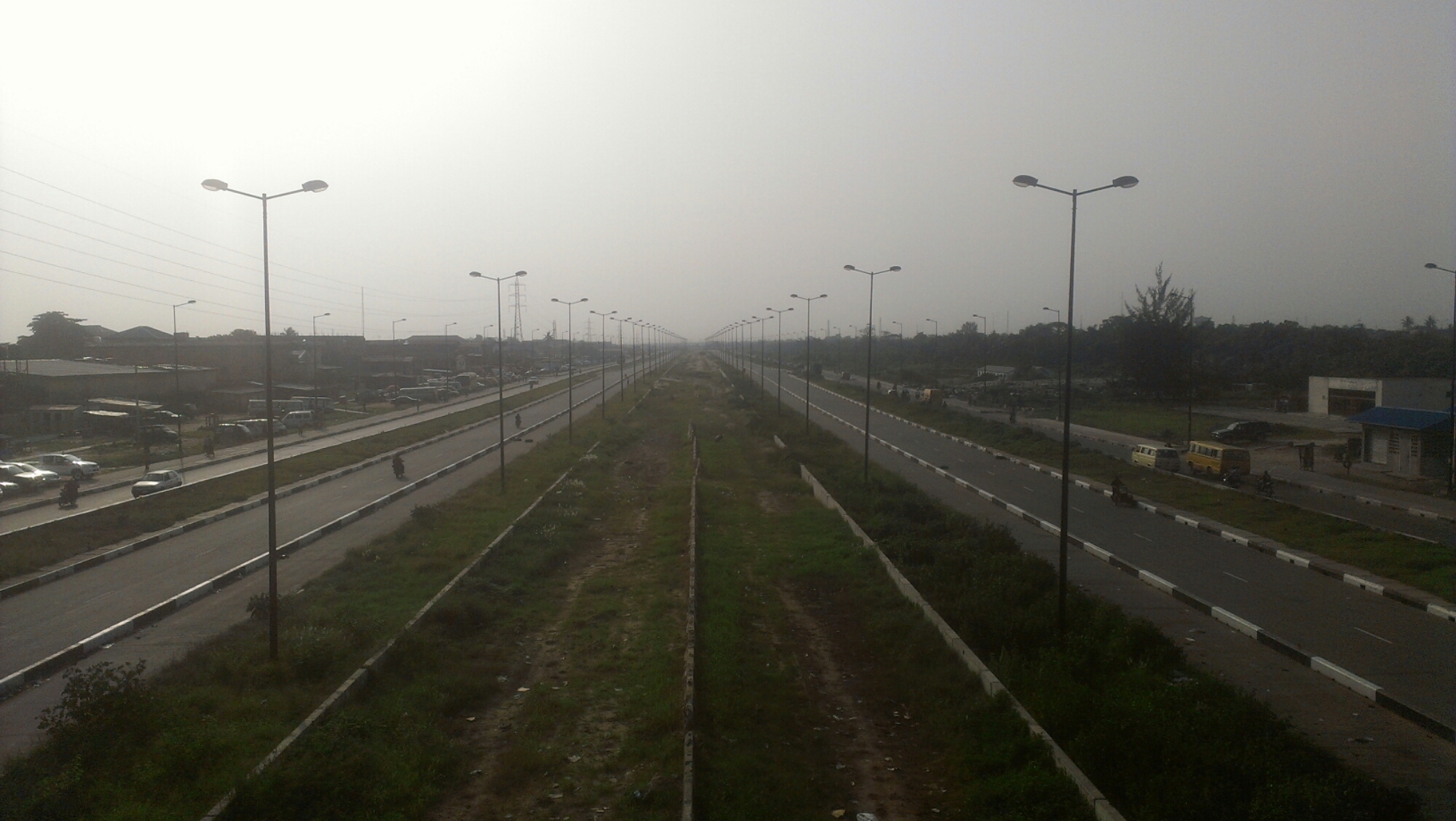 After a naff few days where my bad mood wouldn’t shift, it finally decided to vacate itself on Monday night. It hadn’t helped that we’d been stopped for no reason by the Police on our way to the Mall on an Okada on Monday afternoon. The Policeman saw a white face and was after money, obviously. After looking through Ojo’s bag and demanding identification from us both, he asked why we weren’t carrying the documents that say I’m here officially and wouldn’t have it that we were going shopping for food. He called his colleague over. “I’ve arrested these gentlemen”, the Policeman who stopped us said. “Er, no you haven’t arrested us” Ojo replied. “OK I stopped them” he said. His colleague asked where I was from. When I told him I’m British he said “ah, Britain, that’s like a second home for us. Nigeria and Britain, 1 and 2. He is in his second home… have you got anything for us?” And there it was, the question asking us for money. I wrote a little while back about Mondays being a much more aggressive day than usual, with everybody trying to recoup the money they’d spent over the weekend. We said we didn’t have anything and got back on the bike. You have to laugh I suppose.

I saw a sign on the way back that said ‘some sickness is not normal, but spiritual’. After feeling so rubbish for a few days with attempted break ins and repetitive music and police stopping us, I thought I had exactly that. I cooked a dinner that night and have felt much better since.

We got up at 5am in the pitch black on Tuesday morning to go and meet Seyi at the airport. His flight was due to arrive at 5.45am and we were going to get there an hour after that, seeing as that is how long it takes for the post-landing stuff. We waited and waited and waited, for 3 hours in total, to find that he was actually arriving on Thursday. Ojo was so embarrassed. What will always be funny is getting up at 5am, travelling miles and waiting for 3 hours for no reason whatsoever. Do it anywhere and it’s funny.

As we were up and out, I’d got my emailed invitation letter through to go to Ghana so we popped to Daryn’s office to print it off and get the ball rolling. Daryn kindly asked a friend of his in Ghana to sign the letter so I had the official means of going there. The visit to the Ghana High Commission would come later.

We went to the madness of computer village so Ojo could get a new phone. It’s ironic that a part of Lagos called computer village that sells exclusively electronic products has no electricity. The generators are deafening. I like it there though, it’s got that mad busy energy that so swept me up when I first got here. We went to the same place that I got my phone and the girls that work there are all cheeky. I like them.

We did a bit of washing this morning. It’s a good relaxing task to kick the day off. The tide that had crept in to the compound, creating an impromptu garden pond with all sorts of wildlife. 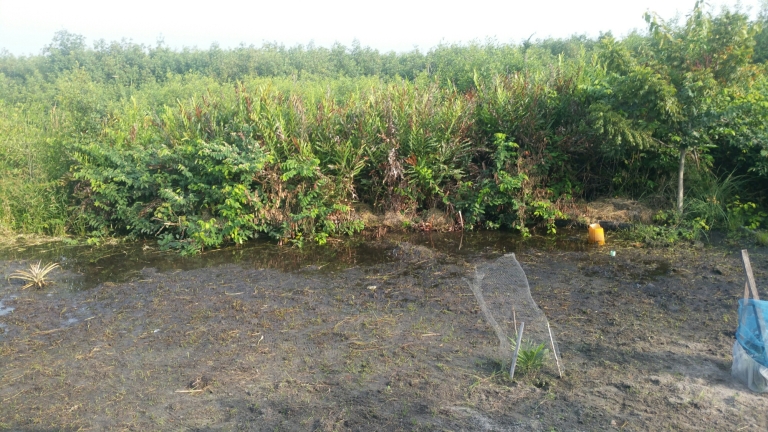 We spoke about Nigerian Pidgin English. Basically everybody speaks it here and yet it isn’t recognised as an official language. Many city-living Nigerians speak 3 languages – their dialect, be it Yoruba, Edo, Hausa, Igbo etc, standard English and Pidgin English. The use of Pidgin means all the different tribes can communicate with each other. Fela changed from singing in Yoruba to Pidgin in the early 70s so more people would understand his message. Unsurprisingly it has many similarities to the Caribbean Creole dialects like Jamaican Patois, which also isn’t an official language. This is the way people communicate so I wonder if there are any considerations on making either official. It would be so hard to tie down though, especially Nigerian Pidgin which has variations from tribe to tribe and city to city. It’s an organic, substantially oral language so perhaps best left unregulated.

We then headed off to the Ghana High Commission in Ikeja with the letter of invitation and my passport and all that – except they said that the letter needs to be given to Immigration in Ghana and they have to send it over for the process to begin. This meant yet more hassle. I saw online that you don’t need a Visa to go to Senegal, so as it was close by, we headed for the Senegal Embassy. All along the road were Embassys for Indonesia, Canada, Spain amongst others – but the building that housed the Senegal Embassy didn’t have the Senegal Embassy in it any more. This sort of thing happens to me in Tesco. Say I really fancy Potato Salad and mentally build a dinner round it, what’s the only thing they don’t have in Tesco? Potato Salad. I wanted celery the other day when I was cooking, and thought about celery all day – we got to the shop and what’s the only thing they didn’t have? Celery. It happens to me a lot.

We were directed to the new Embassy which was a short Marwa ride away and were greeted with the best news – as a British Citizen, I don’t need a Visa to go to Senegal. So tonight I’m looking at flights and hostels and I’m going there next week, all being well.

Speaking of Marwa, they are the tricycle things I mentioned the other day, and get their name from a previous Lagos State Governer. We get so filthy on an Okada so we mix it up now. A Marwa is usually a TVS make and has the engine at the back. It’s a front driver seat and 3 seater passenger cabin, although people sometimes squidge on the front seat next to the driver too . They remind me of those yellow and red kiddie cars you used to see in Toys R Us. I say used to see, they may still sell them. I don’t have much need to go to Toys R Us these days.

I’ve fancied pizza for ages so we went to a Dominos that was handily near the Senegal Embassy. My diet has obviously changed a lot being here so eating that pizza was really hard work! It was so heavy. Delicious though. The 8 staff spontaneously broke out in to song at one point. They must bloody love pizza. On the telly was an MTV style Nigerian programme that spoke of some current issues and got the opinions of Nigerian musicians and celebrities. One of the discussions was lying about your age. It’s really common here and most people do it. I’ve heard of a lot of Nigerian footballers doing it – Kanu, Jay-Jay Okocha and Taribo West are all apparently much older than they say they are. It’s just a normal thing here really. I don’t know why or where it came from. I think for a long time, Nigeria didn’t have birth certificates, so people guessed anyway.

We headed for rehearsal and it was business as usual – loud, proud and brilliant. I finished off teaching the band the Mestre Memeu Baiao arrangement thing and Victory kindly filmed it. What a privilege to come to Nigeria and spend time playing and teaching a Samba band like this one. That makes me so proud to say I’ve done that.