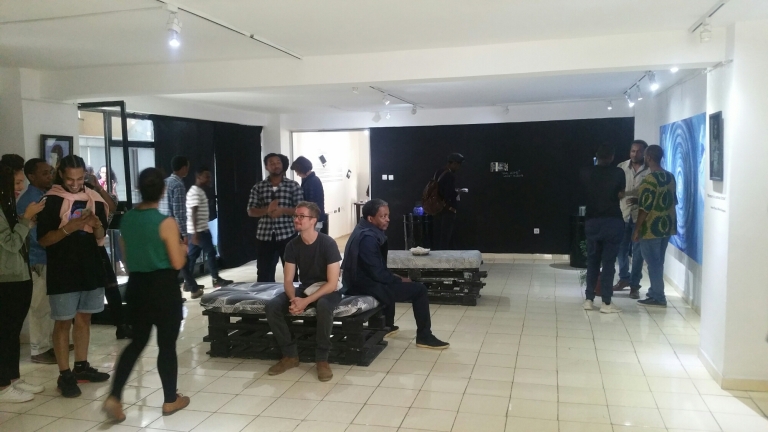 It feels as if I live here already. I’ve made such great friendships with people and feel like a local in less than a week. Seriously, what state of emergency? The same one they have in Paris. This is what you get when you’ve been blessed with the luck of meeting the right people at the right time. The media speaks nonsense half the time but Ethiopia is made out to be a country of hassle and political trouble. I haven’t really seen any of that but perhaps I’m in a bubble. (Nice rhyme that).

I’ve been taken under the wing of the girls at the Dinq Art Gallery and it’s become a second home, which is nice really because the opening of the latest exhibition there, held yesterday, focused on what people interpret as home. It’s linked to the Addis Foto Fest, which saw photographers and artists from all over the world come here. In this exhibition they picked three things – Africa, notebooks and home – and the art showcased interpretations of home from young artists all over the globe in the form of notebooks. There were some great messages and interpretations and it’s a perfect subject because home isn’t the same thing from person to person. My favourite was an Ethiopian living in Norway who’d done a self portrait with all of the questions she’d been asked by Norwegians. “If you are African why is your skin light?”, “Isn’t Ethiopia an island?”, “Do you have your own language there?” etc.

A wall upstairs was left blank so visitors to the gallery could write their versions of home on it. I put ‘home is wherever I feel comfortable’; a safer and less wanky message than my other option, which was to write the opening lines to Talking Heads’ This Must Be The Place.

In the afternoon I popped up to the Red Terror Museum, which is still in Kazanchis and only a short walk away. It’s all about the troubles of the Derg regime and explains the stories of the martyrs that died under them, giving their life to the oppressed people of Ethiopia. The Dergs were a communist military junta and those that deposed Emporer Haile Sellassie in 1974; a coup d’etat that abolished the monarchy and embraced communism. They ruled until 1991, with a change of name in 1987. The museum walks anti-clockwise through from the end of Sellassie’s reign until the early 90s when change came once more.

Being communist, they were fascists, murderers and maniacs, if the museum is to be believed, and their regime could be called a state sponsored holocaust. In the west, we often think of Ethiopia as Drive by The Cars playing over those images of children at Live Aid. That famine was a political one and down to Derg agricultural policies, civil war and drought. The Prime Minister of that regime, Haile Mariam, is still alive and exiled in Zimbabwe. Edom lost a brother to the Dergs too. They took girls off the street who were working as prostitutes and gave them jobs in factories to give them a life away from selling themselves, the only positive I’ve come across so far from their regime. It’s also not true that they banned music here, which is often quoted. The Walias Band album of instrumental Ethio-Jazz, pioneering at the time, was during the Derg regime.

The museum is a very visual account of the time, with many pictures and artefacts and only very little information in Amharic and English. You have to piece the story together yourself. There are hundreds of pictures of the Derg’s wanted list, huge images of war and famine, and a room full of bones. Piles of bones sit there in boxes and it looks like a pet shop for human remains. A picture of who the remains belong to is stuck to the glass panel. It was a bit weird to be honest and a little clinical. I didn’t connect to the fact that these were people because of the way it was presented. I think there’s a lot to be said for lighting in a museum too, and when everything is just a white wash, it drowns out emotion a bit.

I disputed one thing and wrote it in the visitors book – it said that Haile Sellassie coveted the naivete of his people and thought himself the Messiah. I know this not to be true so in the book I jotted. An entire religion in the Caribbean and beyond considers him Divine, but he never said it himself – he said “whatever you believe in, I believe in you”. He could easily have said “yeah, I am God innit” but he always held a great respect for the beliefs of others. I bought a biography of him written by an expert in Italian colonialism so I look forward to getting stuck in to that. The Italians insist they colonised Ethiopia but Africa considers Ethiopia to be the country that wasn’t colonised. I agree with them. Italy were here just like that mate you allowed to kip on your sofa who didn’t bugger off for 5 years. Well not really but it was Mussolini wanting a piece of the European colonial pie and wanting to avenge defeat to Menelik II’s Ethiopia at the Battle of Adwa in 1896. They never fully succeeded in their colonising efforts though. Stalking the skies with planes and the air with gas, Italian military power far outweighed Sellassie’s army, but as the fascists started losing WWII in 1943, the Brits went in and occupied Ethiopia til the war ended, and the Italian occupancy of Ethiopia came to an end.

After a dinner in Dashen and the best food so far – and I really could taste the difference – in the evening Edom and I went to Fendika, an arts space up the road that had a DJ playing Ethio-Jazz and loads of traditional music and dance performances from the different tribes of Ethiopia. I had no idea that there was such a wide range of artistic expression all over the country, all of which differ from the next. I kind of see Ethiopia as a microcosm for the whole of Africa but that could be disputed.

Edom was in great spirits because the launch had gone so well and she’d not been seen without a little can of Skol all day. She must have had 10 or 11. The performance that struck me the most in Fendika was from the north of Ethiopia and I think is from the Amhara people. The dance moves are exactly where Beyonce gets a lot of it from. It’s all in the head and shoulders – in fact it could almost be Indian. Maybe that’s where Banghra came from and 1 of the rhythms was basically Bhangra, even more so than the Guinean Djembe rhythm from last week. A drummer, Masenqo (1 stringed Lute type instrument) and singer performed in the bar, which had a low ceiling and red lights. What they do is walk up to a table of people and improvise a song about those sat down, praising them early in the evening and taking the piss later on. It’s all in Amharic so Edom translated the highlights for me but what a brilliant idea that is. The singer left no gaps so to improvise like that is so clever. I’d love to see it done in English. Can you imagine sitting down to dinner at a restaurant and the music on offer comes over and jauntily mocks your hair and shirt? It would be a brilliant night out.

The Ethio-Jazz DJ had stopped by then but not after I’d scribbled down some artist names. He was playing a copy of Ethiopiques that featured the singer Mahmoud. I think it was Ethiopiques 7. Ethiopiques 4 has my favourite song of the genre (https://youtu.be/-O5WZaAR4rc) but I’ve listened to a lot of this series – the 30th in the series is released next month and features Girma Beyene and a French band. Kidus told me the other day that it’s a French bloke that has compiled them all, a historian and archivist and great enthusiast of Ethiopian music.

Turns out he was there at Fendika as well so I met him. Edom recognised him stood in a corner, chatting. I ended up chatting for half an hour to the bloke who has essentially bought old Ethiopian music to the world, the very Mr Ethiopiques himself, Frances Falceto. Honestly, madness. I came here for Ethio-Jazz and I’ve played with the most famous musician here and chatted to the bloke who made me and a lot of the world know of the music in the first place. I’d bought Edom some wine, chocolate and coffee (romantic at heart) to thank her for the Mulatu link so I have to think of what to get her next. Perhaps a lifetime supply of Skol. Frances was great and very French and told me some things that I won’t share here, but he knows a lot about a lot with regards to attitudes towards the elite musicians here, and cleaned up some of the stories that are told about the country that are actually untrue.

The Ethiopiques series is apparently a real struggle to release in Ethiopia too, which continues the theme of cultures not embracing their own.  It’s something I’m seeing repeatedly in the places I’m visiting. I’m aware of and in awe of the music and art produced in these countries, so much so that I just had to go and see them, and what I find is a lack of interest from locals and a struggle to carry things on. It could be a little bit like living in a city and not doing the tourist things. How many born and bred Londoners have been up the London eye? It’s all Spanish teenage tourists whenever I walk past, backpacks and pavement hogging.

Non-natives will start leaving Addis shortly and returning home for Christmas, so I expect to see a bit of a different city in the coming days. George is off back to Uganda so I need to find a new place to stay too. I feel like I’ve used up my lifes luck on this trip so far so hopefully I can find a cheap option.