I forgot to include something of yesterday. As we successfully navigated the streets of Computer Village, there were men lined up at one part selling little pots of pink lipstick or lip balm. They were all quite masculine looking blokes, all with this bright pink stuff on their lips, puckering up and selling these tiny pots. I don’t know who their target audience is.

Today we had to get an Affidavit from a Court so I can get a Police crime report number for my insurance faff. We waited over an hour for a boat to Ojo, the place not the person, and when we boarded the boat, the engine started conking out. Then it started raining and was really windy as we pootled up the water at no miles an hour. It took ages and the poor Nigerians on board were frozen. I felt like I was on Southampton Water.

The Court was being renovated so we did the process underneath an umbrella in the street. The Court had a nail painting booth and also sold oranges. The oranges here are green. I needed a passport photo so we popped over the road and I had my picture taken by woman with a tatty pink handheld camera. I look thoroughly displeased. I only needed 1 but I had to buy 8, so if anyone wants one, do let me know.

We got an Okada back to Satellite Town. The driver beeped at anyone and everything, so much so that his thumb had reshaped to the horn button on his bike. I’m sure these rides are getting more mad. This one today finished with us weaving through the traffic on the wrong side of the road, having spent the previous 5 minutes bombing it up the pavement.

We often take the Badagry Expressway Road on our excursions around town. The road is huge – it starts from the National Theatre in Iganmu, just before Lagos Island, and finishes at the border with Benin Republic, where it assumes another name. Technically the road goes all the way to The Gambia, or at least as far as Dakar in Senegal. I think it might be the road Ginger Baker used to take when he drove his Land Rover from London to Lagos in the early 70s. It is currently undergoing a 220 billion Naira expansion, with a railway being built in the middle of 10 lanes of traffic going both directions. Currently the state of the road is appalling in places and the approach to building it seems very Avant Garde. You’ll see huge concrete structures that look almost complete, and then nothing for a few miles, and then a load more concrete semi-road. Some of the railway stations look to have been completed, and then it just stops. I think different contractors are doing different sections. The early stretch, from Mile 2 for 25km, is now a Chinese Company for example, and another section is local contractors Julius Berger. A lot of these half completed structures have been swamped with market. It’ll be brilliant when it’s finished because the road and rail links in and out of Lagos are very much needed but it’s chaos at the moment.

I was in Austria a few weeks ago and saw my first taste of the art of Friedensreich Hundertwasser. He was an artist and architect and had special interest in inner city environmental protection. He had an aversion to straight lines and flat flooring in his designs. Vienna has a number of Hundertwasser buildings, including the Hundertwasser Village opposite a set of social housing that he’d re-jigged in his style. The thing that struck me the most was his attitude to flooring – no floor surface in his buildings are flat; they swoop and curve and flow like sand dunes. The roads here remind me of his uneven flooring. Off the main roads, there’s barely a flat surface here, and even the main roads are a lottery. 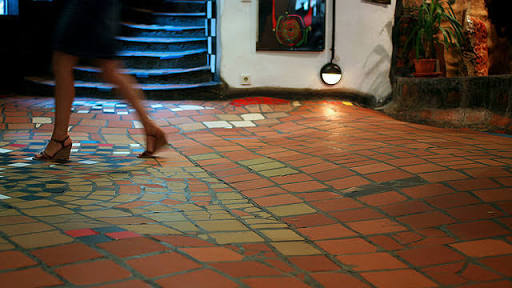 We went to see Seyi’s Mum before rehearsal. She’s an amazing woman, full of soul and wisdom. We spoke a little about the other night and she was full of depth towards it, munching on a sausage roll and sipping fizzy lemon. She lived and studied in Hackney in the early 80s before returning to Nigeria. Ojo says she used to be a teacher, and often says to mischievous locals kids ‘hey! I am the teacher of your teacher!’

Rehearsal, as always, was an absolute stormer. I had the chance to just play for the 2 hours today and I absolutely loved it. I sort of fell out of love with Samba Reggae for a short time earlier this year and since the middle of June have just been easing myself back in to it. It was cosmic to wear a repenique today and play out all the tension with 6/8 polyrhythms and Olodum arrangements and dynamic tempo changes and all the things that still continue to give me goosebumps. No other music gives me that feeling so consistently. Playing so often is working wonders. It can be so easily forgotten, but playing music really does so much for the soul. If you’re lucky enough have access to playing music, be it instrument or vocal or anything, it’s so important to find the time to do it, and to do it often. And if it’s with other people as well, brilliant. This isn’t meant to sound preachy but if you have the opportunities to play music, do take them.

Ojo and I had dinner and he told me a story about his Graduation. His mates went out and caught a goat, killed it and cooked it. The first person they served was, unknown to him, the owner of the goat. He tucked in, loving it. 2 days later, he looked and looked but he couldn’t find his goat anywhere. It dawned on him that he’d eaten goat 2 days before but couldn’t bring himself to say anything out of pure embarrassment.